Kingman Spyder has just released specs on the new Spyder MR5 series of tactical paintball markers. The MR5 will continue the MR series M4 style look with a bunch of new features added. The new MR5 will allow either hopper fed or magazine fed operation depending on the style of game your playing. The Spyder MR5 will also allow you to use standard .68 cal paintballs or the new tiberius arms first strike sniper rounds. 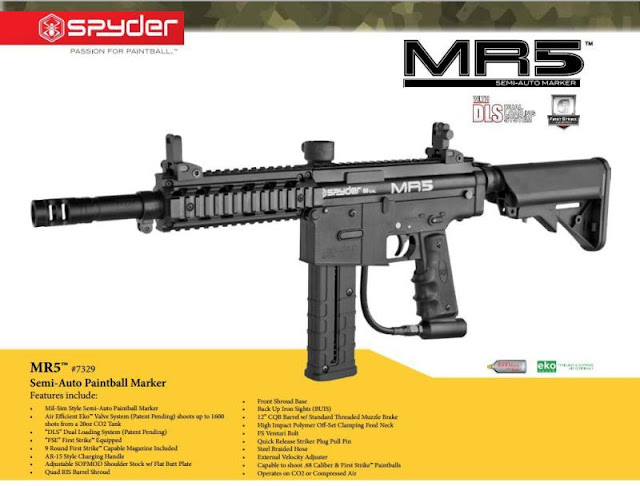 The MR5 uses kingman's patented eko valve system for the ultimate in air efficiency. As expected froma spyder,the MR5 will be compatible with co2 and compressed air. The stock barrel will be a tactical 12" ported barrel with a tactical rail system to allow you to add any scope, grip or site upgrade you can think of. Also inlcuded with the MR5 is a multi position adjustable stock. Additional 9 round first strike magazines will be available for sale seperately. Pricing has not been released, but i'm guessing we'll see something in the $200 range for the semi auto version. Standard colors will be black and olive.
Posted by Unknown at 2:52 PM