The New EMC kit for the planet eclipse etha allows you to add rails and that tactical look to your marker. The possiblities are endless. Flashlight, site, scope, front grip, it's all possible now. The Eclipse etha is the first tru entry level paintball marker from planet eclipse. Planet eclipse has made there name on the revolutionary Ego and Geo paintball markers. Eclipse is the most popular tournament level marker. More pro  and semi pro teams have shot the ego and won tournaments than any other marker. The Etha was released in 2011 and is the leader in the $395 price range. Bulletproof made in the UK quality and performance to rival it's higher end cousins. The EMC kit will take a bit of work to install, but the instructions were pretty straight forward and you should be able to complete in less than an hour if you have any mechanical savvy. 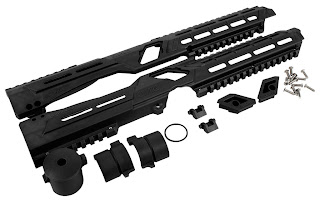 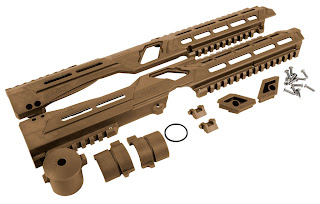 As you can see a black and Tan version of the emc kit are available. Not ready to do the install yourself? A preassembled version is expected to be released shortly or your local paintball shop should be able to do the install for a nominal fee.
Posted by Unknown at 6:05 PM